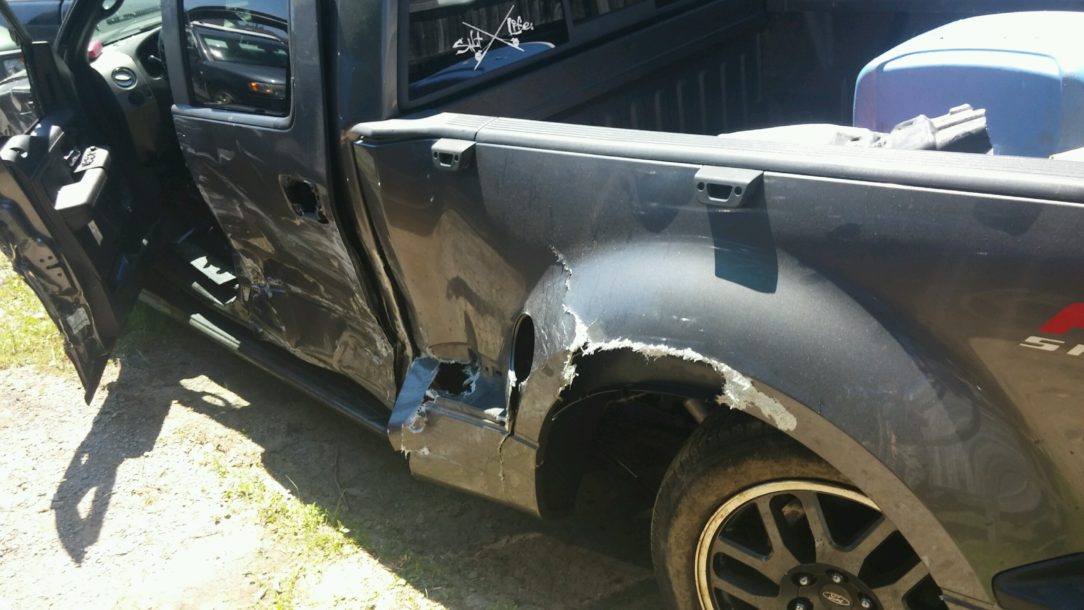 A week or so ago I got a message that I was glad to read, but sorry for the circumstances. A family whose car seat I had checked has been in a pretty severe accident and they wanted me to recheck their new seat in their rental car. I was so happy that they all made it out of the accident alive, mostly because they had prepared for an accident to happen.  As a car seat tech I teach parents to prepare for the worst, hope for the best. You never know when an accident might happen. They’re not something we have control over. So it’s important to make sure to your child is in their car seat properly every single time they are in the car. After checking Lyndsi’s new seat out in their rental car we chatted for a bit and I just thought it would be really important for her to share her story. She was prepared for this accident to happen. Her uninjured child is proof of that. This is what Lyndsi wanted to share with you…

It was surreal, those headlights drifting around the bend and coming straight for us. In that split second, my mind denied reality because surely he would swerve at the last moment. Why would anyone intentionally drive straight into us? It was lunacy. But the sickening sound of plastic, metal, and fiberglass crunching came anyway along with utter sensory chaos as we flipped onto our side and skidded along the road.

When we finally stopped, there was a horrible noise coming from the truck and the sound of me really, truly screaming for the first time in my life. After a moment, my mindless screaming switched to, “Get Aeryn, get Aeryn, get Aeryn!” even though that’s exactly what my husband was already doing. My daughter was screaming in the back seat, so I at least knew she was alive. My dogs I was less certain about.

The clock had just barely shifted to a new day, July 5th, when we were hit by a young man who had fallen asleep at the wheel. The “we” included my husband, myself, our 4.5 month old daughter, and our three dogs. We were driving the back roads through VT from my parent’s house in NH as we had done many times. We were in our family vehicle of the last 8 years – a 2008 Ford F-150. The young man was in a Toyota Yaris. He came very close to never waking up that night. When I realized he was heading straight at us, I remember slamming on the breaks and trying to swerve to the right. There was a guardrail there that helped flip us on our side, but I had swerved just enough to keep it from being a head on collision. Instead, his vehicle ran the length of ours and spun off to the other side of the road.

The story has much more to it, including crashing in the middle of a no cell service zone, losing two of our dogs in the dark of midnight and finding them again, trying to get ahold of family who didn’t know where we were exactly, the people who helped and the ones who didn’t, and a long night in the ER. The most amazing part of it all though is that my daughter came out of it perfectly healthy and calm. While my husband was being treated for a horrible laceration where his arm dragged along the ground and they were trying to determine just how many bones were broken in my foot, my daughter spent her time charming the ER nurses and eating and napping like nothing out of the ordinary had happened.

The ER doctor that evening said that, in his 30 years of practice, he had never seen a child who was properly strapped into their car seat receive any serious injury. Somehow in my head, even though I knew car seats were meant to protect infants and children, I still thought they could get hurt, just not as badly. Looking between the battered mess that was my husband and I, and my perfectly unharmed baby, made me more of a believer in car seat safety than ever. What I would have given to be rear facing in a car seat that night!

We chose to have Ilissa, owner of Binx, inspect our car seat installation prior to our daughter’s birth because she is a child passenger safety technician (CPST). Even though we did almost everything correctly, Ilissa still taught us how to get the tightest installation, where in our vehicle was the safest spot for the car seat, and basic dos and don’ts of using an infant car seat outside of a vehicle. No matter whether it is your first child or your fifth, I would recommend that everyone have their car seat installation checked for all of their passengers by a CPST and receive instructions on how to properly use and fasten it. To prevent incorrect information, it is vital to make sure the person checking your car seat is a CPST, which not everyone at a fire station or every nurse is. Because of Ilissa’s instruction, I checked my daughter’s chest clip position and the tightness of her straps religiously. The day after the crash, we purchased another seat and immediately scheduled another check since it was a different seat than our first and a completely different vehicle.

I also wanted to note that all three of our dogs escaped the car accident with no injuries, and I firmly believe that this is because all of them were using dog seat belts to attach them to the locked seat belts of our truck. We had been using them for five years, at first to keep them from bothering us while we drove which was enough of a danger, and then because we did not want them to become projectiles themselves ever. In our case, had they not been seat-belted in, I have no doubt that one or all of them would have been killed as they were projected through the vehicle and through the windshield or out of shattered windows or worse yet, on top of our daughter in her car seat.

You never think that the next car ride you take could be the one that ends in an accident that changes everything. It was the last thing on my mind as I was driving that night. My daughter is alive because we chose to pay attention to strict car seat safety for every car ride. It makes me sad to see any little ones who have even small mistakes in their car seat safety, not because I know so much more, but because I know how much it can matter. Get your installation checked, know where to ask questions, learn where the chest clip goes and what the pinch test is, read your manual, and never be ashamed to ask for help. Thank you so much to Lyndsi for sharing her family’s story. Please make sure to get your child’s seat checked for a proper installation and to make sure you’re using it properly! Also know that after an accident you need to get a new car seat. There can be damage that can’t be seen and that would be a problem if you were in another accident!